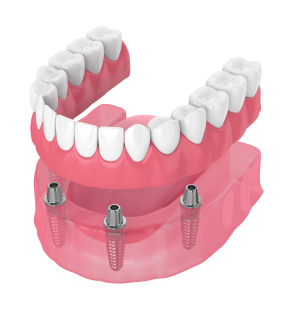 Did you know there are over 178 million people in the United States who are missing a tooth and 40 million people in the United States are missing all of their teeth? For those aged 65-74, 30% are missing all of their teeth. Besides the cosmetic issue of a missing tooth, another problem when a permanent tooth is removed is that the other teeth shift and this can cause the bite to become misaligned. This misalignment and the missing tooth can cause too much stress on the adjacent teeth which can cause problems like chipping and breaking of teeth, the inability to chew properly, TMJ issues and additional tooth loss.

Dental implants are an excellent way to replace one or more missing teeth. Each year, around 5 million dental implants are placed in the United States. A dental implant is typically a titanium screw that is placed in the bone where the tooth root used to be. A crown or cap can then be placed on the implant to replace the missing tooth. This gives the person the ability to chew and eat like they did before they had the tooth removed. The dental implant and crown do not come out of the mouth and allows for proper chewing, protection of the adjacent teeth from undue stress as well as preventing future problems of shifting teeth and TMJ issues.

With the implant bridge, multiple implants will be used depending on the number of teeth missing. After the implants are placed, a bridge is fabricated with crowns or caps that are attached to the implants, and additional crowns are attached where there are spaces between the implants. Like the implant crown option, the bridges do not come out of the mouth and restore the look of having teeth as well as giving the person the ability to chew and function like they had all their natural teeth. With the individual implant crown and implant bridge options, the natural remaining teeth typically do not require any work or preparation.

When there are no teeth remaining in one of the jaws or an entire mouth, a denture was typically the only option. The problem with dentures is typically the lower denture. Around 85% of lower denture wearers are not happy. The reason behind this is that there is no suction on a lower denture. An upper denture covers the entire roof of the mouth and gets suction from the back part of the denture against the roof of the mouth. The lower denture is shaped like a horseshoe or the letter U. The reason for this is the tongue has to have room to move. Unfortunately, this leads to no suction, a denture that moves, and can cause pain and pinching.

The chewing capacity of a denture as compared to healthy natural teeth is around 10-15%. Many patients with dentures are very frustrated because they cannot eat many of the foods they used to. With dental implants, a denture can be “snapped-in” and held very tight, giving a person the ability to chew and eat the foods they want and not be worried that their denture will slip or cause embarrassment by coming out of their mouth.

Jim, a very nice gentleman from Oklahoma City had his teeth removed and suffered from wearing dentures. He didn’t want to go out and eat with friends and family because his dentures would move around his mouth when he ate. He would end up just ordering soup instead of a burger or steak to save himself the embarrassment or the trip to the bathroom after the meal to clean all the food out from under his denture.

Jim had decided life was too short to be constantly worrying about his dentures, he just “wanted to be able to eat properly again.” Jim had Dr. Corbyn Rhodes at Advances in Dentistry in Oklahoma City place implants on his upper and lower jaw to lock in his dentures. Jim said, “It was one of the best decisions of his life and he should have done this sooner.” Jim’s wife said he was a much happier person, that he smiled all the time and would talk to friends at church and go out to eat more often. Jim said he felt like a new man. Advances in Dentistry is a leader in dental implant placement in Oklahoma City. Over the past 25 years, they have helped thousands of patients restore their mouths and smile.

All content is the property of Dr. Corbyn Rhodes. All Rights Reserved.